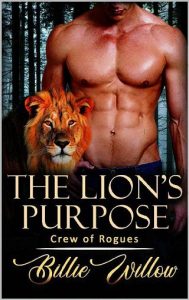 Cell mates…or fated mates?
In one night, Lara’s life shifted…literally. In the space of a few hours, her parents are killed by a drunk driver, she is attacked and bitten by a wild animal and then left to bleed out. Instead, she transforms into a Panther. Thrown into a world she has no knowledge of, she is kidnapped and imprisoned by an underground anti-shifter organisation, in the cell next door to a handsome, charming Lion Shifter called Archer. Lara finds herself drawn to Archer, but when he announces they are ‘fated mates’, she immediately thinks the notion ridiculous…isn’t it?
Archer never believed in fated mates…but that was before he met her. Being a rogue shifter meant learning to be alone, something he’d known ever since he escaped his drunk and abusive father as a teenager. When Archer is drugged and locked in a cell next to an endearing woman, everything in his body screams mine, but when she claims the whole idea of fated mates is a farce, he is forced to let go of his instinct to be with her, even if it kills him.
As Archer and Lara risk their lives and face demons from their past, their chemistry builds to fever pitch but will a secret from Archer’s past destroy everything?