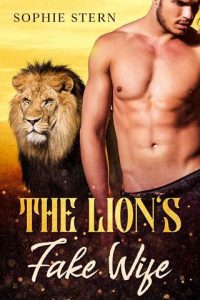 One lion. One human. One important lie.

Melinda:
I don’t have much going for me until I see an ad in the local newspaper. Wanted: one bride. It seems like a total scam except for the fact that it’ll get me out of Kansas. After dealing with my past, I’m more than happy to claim this Get Out of Kansas Free card. After spending a year in prison, staying married to a CEO for half of a year doesn’t seem too bad, now does it? Yeah, some weird things seem to happen in Rawr County and the people there aren’t exactly welcoming to outsiders, but it can’t be all bad…can it?

Basil:
I’ll do whatever it takes to improve my image at the company. Apparently, my shareholders don’t look too fondly on the fact that I’ve been something of a playboy in recent years. All that’s about to change, though, because I’m getting married. The moment I see Melinda, I know that she’s the one. My inner-lion knows, too. She’s not just the woman I’m going to marry for the sake of improving my personal image. She’s the one I’m going to marry because she’s my fated mate.
Only, Melinda doesn’t know I’m a shifter, and she’s got a few secrets of her own. When an enemy from her past resurfaces in Rawr County, we’re going to have some hard decisions to make. We’re going to have to fight for what we believe in, and we’re going to have to fight for her safety. Luckily for Melinda, I love a good challenge.