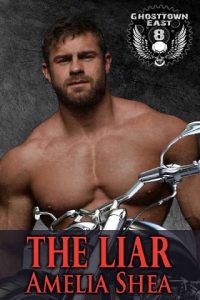 It started out innocently. One simple, harmless lie. Or two. Possibly three. Now Taryn Blake is caught in her own web of lies and searching for a lifeline. While trying to weave her way through damage control, she’s hit with another blow. Taryn finds herself in a world of trouble, forced to rely on an unlikely hero and lands her at the mercy of a biker who seems hellbent on making her repent. Not an easy task for a strong-willed woman. On the surface, Taryn gives everyone what they want to see, an unbreakable force of confidence and unwavering strength. Taryn has worked long and hard to build that façade, and no one, not even a sexy, sharp-tongued biker who makes her palms sweat and her heart race, can break down her walls. Or can he?
Ryan “Brew” Larsen does not have forever in mind. As a well-known infamous bachelor in the Ghosttown East Motorcycle Club, the last thing he has on his mind is settling down. He is not the type of man to play a knight in shining armor, but he lands the role when an unsuspecting woman deems him “her” man and gets entangled with a rival motorcycle club, putting herself in the line of fire. Brew should abandon her and let her sink or swim with her lies. But? He’s invested, and his growing desire for the little liar isn’t something he can deny. This woman has changed the game for him. Taryn has managed to do something countless others have tried to do and failed. She’s forced her way into Brew’s life, under his skin, and into his heart.
Brew and Taryn may be all in with their relationship built on deceit, but Taryn’s lies have greater consequences than anyone could have foreseen.