Home
Fantasy
The Kiss & The Killer by Melissa Marr (ePUB) 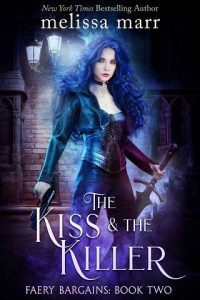 “It’s not all blood and magic in my business, despite what people wanted to believe. Sometimes it was blood, magic, and cartoon bandages.”

Half witch, half killer, wholly unsuccessful at every Faery Bargain so far…Geneviève Crowe makes her living beheading or resurrecting the dead in near-future New Orleans. After entering an accidental engagement, overcoming attempted murder, and discovering a family secret, Geneviève is ready for things to settle down, but carnival season in New Orleans is not the best time of year for “normal.”

When Eli Stonecroft, the faery who has claimed her heart despite her best attempts, offers her a new faery bargain–she’s smart enough to say no . . . right up to the point when she has to decide between dealing with the consequence of this faery bargain or facing the killer alone.

As the draugar mix with the locals and tourists, and bodies start to pile up, Geneviève is enlisted by the faery king and the draugar queen to find the killer amidst the swirl of parades and parties of carnival season.