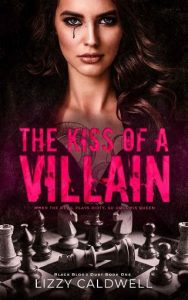 One word.
One promise.
One mark.
The start of a deadly game between two rival gangs fighting for one thing only.
An empire.
Arsen West is called the devil for a reason.
The vicious gang leader has known a hunger for power and dominance for as long as he can remember. Having clawed his way to the top of the food chain, he now leads them into a raging war waged against his rival. There isn’t a line he wouldn’t cross.
He wants it all.
And when he desired it most, a solution fell straight into the palm of his hands.
The key to open the gate to his empire came in the form of a young woman.
Victoria White carries her pain as her armor. It’s her fuel to keep on fighting, to survive in a world that knows no mercy. When the ruthless gang Black Blood offers her a deal she cannot refuse, Victoria ends up signing the contract with her life.
But, when the devil plays dirty, so does his queen.
And in the end, the worst game you can play is one called love.