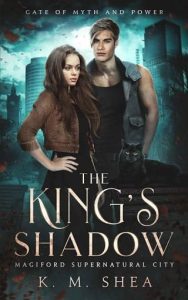 I just spent the last month pretending to be the pet cat of an elf king. Today, I discovered we’re enemies.

In a supernatural society filled with vampires, werewolves, and wizards, I’ve always been an outcast with my ability to turn into a housecat. No one knew what I was.
Turns out, I’m a shadow—a race of supernaturals that were wiped out by the elves centuries ago.
Who explains this to me? Noctus, the elf king I’ve been staying with while pretending to be his pet “cat,” not knowing I’m the archenemy of his people. Talk about the most awkward ancestry results ever.
Now I’m stuck staying with Noctus because he can’t let me go thanks to all of his secrets I unwillingly learned as a cat. At least he hasn’t killed me. Yet.
If that isn’t bad enough, I’m being tracked by a creep obsessed with killing me because I’m a shadow, and he doesn’t mind doling out collateral damage during the hunt.
So I’ve got a mysterious elf king holding me captive in his hidden home, a slew of new powers to learn with my revealed ancestry, and a psychopath on my tail. Wow, things are looking up.
It’s time to find out if cats really do always land on their paws.