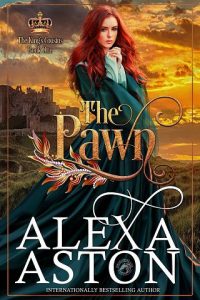 Do you LOVE Alexa Aston Stories? Or just LOVE Medieval Romance? Here is the perfect collection to sit back, relax, and binge read!! Three young children are separated when their father commits treason against the King of England, romance, excitement, and intrigue abound. Follow each of their stories in this exciting new series!

Included in this boxed set:
Book 1: The Pawn – 1338 A.D. – Exiled to a convent after her father’s execution for treason, Katelyn de Blays has fleeting memories of the man she adored and the outside world. When her brother’s search leads him to find Katelyn after many years, she is eager to leave with Landon and begin a new life. He brings her to the court of her cousin, Edward III, who betroths Katelyn to a powerful earl of Northumberland, using her as a political pawn to show his continued support of his northern noblemen.

Book 2: The Heir – 1340 A.D. – After his treasonous father’s execution, Landon de Blays is raised alongside his cousin, the future King Edward III. Landon constantly fights to prove his own loyalty to the crown and becomes England’s youngest knight. Rewarded for bravery in battle, the king gifts Landon with a title and estate, something he’s longed for over the years as much as restoring his family’s good name.

Book 3: The Bastard – 1342 A.D. – Spirited away when his father, Adelard de Blays, commits treason, bastard Quill Cardon longs to reclaim his family name when he reaches manhood and reunite with his half-siblings, Landon and Katelyn. Winning the king’s tournament at Smithfield and saving the life of Prince Edward leads to Quill being awarded an earldom and an estate of his own—but what he most desires is Lady Tristanna Willoughby, a woman he can never have.

Each book in The King’s Cousins Trilogy is a standalone story that can be enjoyed out of order.