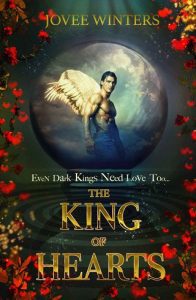 You might think you know the story of Eros and Psyche… but you’re wrong.

The day Aphrodite learned of her pregnancy she received a prophecy from the Three Fates, that she would lose the love of her offspring to another. A woman. A mortal woman at that. Determined that that fate will never befall her Aphrodite will stop at nothing to make certain she ruins any chance of happiness for that vile human. There’s only one problem, she’s not quite sure yet who that woman is. But it’s only a matter of time before she discovers her.

Eros. The most beautiful winged male in all of Olympus. Loyal. Brave. And dim. At least that’s how all of Olympus sees him. A mindless puppet who serves his mother’s every whim, no questions asked. But that’s not how Eros views himself. He believes that love is loving despite someone’s flaws. And that if his mother demands something of him he must faithfully execute her wishes. But lately, his mother’s behavior has grown increasingly wild and erratic. Her demands of him are beginning to make him uneasy. She’s gotten colder through the years, crueler even. And now her sights are set on a princess from the land of men. She tells Eros to go and curse the female. And though he goes, this time her demands of him do not sit well in his gut. But when he finally spies the woman, he begins to question all that he believed. And starts to wonder if maybe there is more to his mother’s madness than he knew.

There is one on Olympus determined to thwart Aphrodite’s efforts. He works in shadows and few could ever imagine just what a formidable foe he can be when he sets his mind to it. But he knows something about the mortal princess that no one else upon Olympus does. Psyche must be saved at all costs. Her fate is far greater than any of them could imagine…