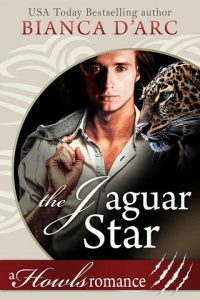 The Jaguar Star (Tales of the Were: Jaguar Island #4) by Bianca D’Arc – Free eBooks Download

A tempestuous fling on a tropical island with a secretive movie star or love that will last a lifetime?

Ren is a jaguar shifter whose inner cat is very close to the surface. All the human world knows is he’s got stunning green eyes and a killer physique. The man can also portray just about any part put before him and he’s turned his killer instinct into an international career as an actor in big budget blockbusters. When his Alpha asks him to take on a project in order to raise the profile of a new director he agrees, but only because he’d do just about anything for his Alpha and his people.

Katrina gave up on acting after a few years of trying her best and went back to work at her family’s restaurant. When the director sees her there and asks her to come in for a screen test, she doesn’t want to believe she might finally be getting her big break. Cast opposite one of the brightest stars in the world, Katrina can hardly believe her luck. The film may be low budget, but it has star power and Ren is both kind to her and every bit as gorgeous in person. More so, in fact.

When danger threatens, Ren is the first to act, and when he declares his serious interest in her, she almost can’t believe it. Only…she’s feeling it, too. An undeniable attraction that goes more than skin deep. Does she dare trust this man who could have anyone? Dare she believe him when he says he’s given her his heart for all time? How far must he go to prove his love is real?