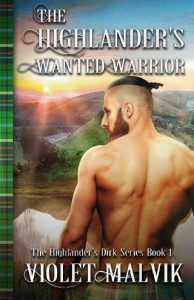 Ross Stewart is a skilled hunter, but not a trained swordsman. When Blackheart fighters attack his castle, they are looking for his womanizing older half-brother Scott. His affair with the unmarried Arabella has produced a daughter, but he refuses to marry her.

Ross fights back valiantly, but Scott is murdered for his dishonor.
Will Ross revenge the murder of his half-brother for the sake of a child he has never met?
Twenty years ago, Laird Gregor gave up his illegitimate blue-eyed daughter out of duty to his barren wife Catriona. Miraculously, Catriona gave birth to their daughter, Malvina, five years later.

Now Gregor is on his deathbed and resolves to finally share his secret with the fifteen-year-old Malvina, asking her to find his other daughter and unite with her as one family. That daughter is Arabella MacAlister, now unhappily married to the violent and cruel Lachlan MacAlister.
Can Malvina find a new family and a new purpose with her half-sister in a world of betrayal, lust, and deceit?