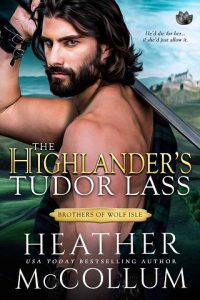 Callum Macquarie would give anything to go back to the Highlands and Wolf Isle. Instead, he’s stuck circling an undefended English castle in too-tight breeches, longing for his bed and his plaid. But he has an oath to keep: to bring home the bonny Anna Montgomerie and her sister before that devil of a blaggard pirate Jundeau finds them first. Only the lass he’s come to rescue has no interest in going back to Scotland with him. Or ever.

To hell with Callum and his oath. Anna won’t step one foot in Scotland—no matter the danger. Not after what she’s left behind, and not while there’s a chance she can remain in England. But she has a plan. And the only hitch involves a braw, fiercely protective highlander who refuses to leave…and whose touch burns hotter than fire.

Now Anna and Callum are caught between the threat coming for Anna. Staying means danger. Leaving means death. And a blazing attraction that could spoil everyone’s plans.