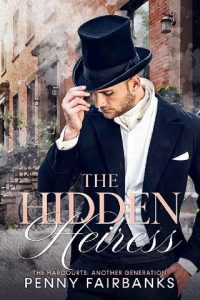 The Hidden Heiress (The Harcourts: Another Generation #2) by Penny Fairbanks – Free eBooks Download

A journey to New York will challenge his defenses. A foreign man will encourage her to grow. A lie at the center threatens to tear them apart.

Hugh Harcourt wants love and won’t settle for anything less. This proves difficult when he realizes that many people in his wealthy society are superficial and only seek to improve their own statuses instead of making real connections. When his closest friend invites Hugh and his family to spend three months in New York after another disappointing Season, he hopes for a breath of fresh air from the world he’s used to. He meets a lady with a carefully guarded secret who turns out to be more than meets the eye. Could she be exactly what Hugh is looking for?

The daughter of an extremely wealthy American family, Charlotte Pellam struggles with her privilege—especially when she discovers that her father’s mining business has been putting profits over safety. When her best friend introduces her to a charming Englishman who is clearly disenchanted with the trappings of wealth that Charlotte displays, she starts a lie to hide her identity in the hopes of earning his affection with the heart beneath her extravagance.

All lies must one day see the light. Will Hugh set aside his prejudices to find the love he thought was impossible? Will Charlotte reveal the truth before it’s too late?