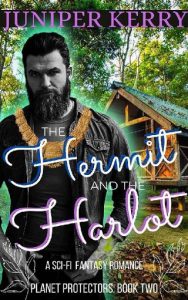 Flora is lost in an unknown forest until she stumbles across a cabin in the woods. At first, she’s relieved; finally, someone who can help her and her friend. But it becomes clear very quickly that this “hermit” is not who he seems. Not just because he uses a hologram to hide his real face. Not just because he acts like he’s used to people following his orders. But because he won’t tell her his name, or anything else about himself.
It’s none of her business, really, Flora tells herself. She’s not here to uncover some great secret. As soon as her friend heals, they’ll be on their way. She doesn’t want anything to do with this hermit after that… Especially since her body calls to his in a way that is just plain dangerous.
Prince Ozian shouldn’t be here. He should be on F’Reit Prime, leading his people, not stuck in the middle of a sentient forest hidden behind a disguise. Of course, he does not spend most of his time feeling sorry for himself; in fact, he has lived like this for years, and managed to make it work. That is, until Flora pushes her way into his cabin and into his life. Her curves and forth-right personality make her almost impossible to resist. Will he be able to keep her at arm’s length? Or will he give in to temptation and claim her for himself?