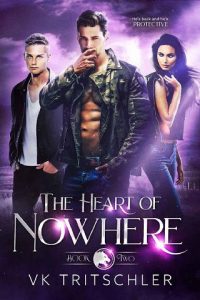 He’s back, and he’s protective.

Nicci, an abandoned were-panther only just reunited with her family, has now not only formed her own pack and become the Alpha, but has become a target for others who want her bloodline.
Dru, a famous race car driver and inheritor of one of the most influential packs in Australia, was trying to escape notoriety and his fate but instead found Nicci and fell in love. Now he must prove himself worthy of being pack Alpha by being a better leader than his father ever was.
Together they formed a new pack in a deserted town called Nowhere in the wilderness of rural Australia.
When Sebastian, a were-bear from Nicci’s past comes to town to warn them that she is in danger, Dru can’t handle his emotions. Mad with jealousy, he soon finds himself unintentionally back in the clutches of his father’s plans. Nicci’s family come to help defend the folk of Nowhere, but are their efforts genuine or do they have plans of their own?
Who will save Nowhere, or will both their worlds collide?