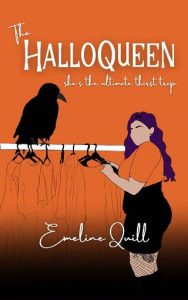 Annabel is back home in Quaker’s Wharf to help her aging mothers and run her plus size, inclusive, alternative fashion business, HalloQueens. The annual release of the Fat Girl Fall collection is her busiest time of the year, especially since she has to do all of her prop shopping during spooky season to save precious coin on skulls, candles and more!

During a visit to the local Halloween pop-up store, Annabel meets Thomas, a broody French vampire recovering from the heartbreak of the other members of his triad disappearing. They left him with nothing, and now he’s stuck selling coffin shaped nails and sexy animal costumes to teenagers instead of running his profitable haunted tour business with his ex-lovers. They’re both slated to be insanely busy this time of year, so what’s the harm of blowing off a little steam together?

He needs energy from mortal’s emotions to survive, and she needs her anxiety controlled while she finishes preparing for her launch – it sounds like a great match! She’s known as the woman who sells clothes by going viral for thirst traps, and he’s a homeless energy vampire that she’s accidentally caught the attention of. When Others begin appearing in Quaker’s Wharf, Bels learns new things about the world and her family. She wants Tommy to leave, but she is feeding him the greatest thirst quencher for him of all — lust. Thomas will stop short of nothing to get her to be his forever and to claim her thirst traps for his eyes only.