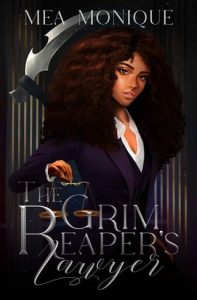 When having to decide between spending her afterlife in hell or as the Grim Reaper’s Lawyer, it’s not even a hard choice for Joyce Parker.
Of course she’d choose hell.

Joyce thought her prayers were finally answered when her client killed her. Yes, she knows, it’s morbid. But, so is being a lawyer. Now dead, Joyce thought it was blue skies, angel wings, mimosas and Jesus. Well, she was embarrassingly wrong. The insufferable, but good-looking Grim Reaper needs a favor. He needs her to represent him in the newly formed Reaper’s Court. That is, of course, if she wants to go to heaven rather than to hell, which is exactly where she was heading.
What starts off as a favor turns into a whirlwind of chaos with Joyce and the Grim Reaper being in the center of it all. Not only does Joyce have to help the grumpy Reaper, but she also has to save the whole Afterworld—a job she most definitely did not sign up for. Joyce’s life on earth was boring, but her afterlife ends up being the most alive she’s ever felt. Trials, secrets, evil reapers, missing souls, traitors, stolen mimosas and unexpected romance—all the elements for one hell (literally) of a life after death.