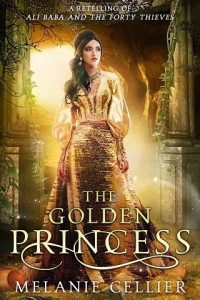 Exiled from her old life as the daughter of a vizier, Zaria still grieves the lost friends of her childhood. She’s grown accustomed to her new role as a servant, though—up until the day she stumbles on the fabled lost cave of treasures.
The wealth inside is enough to transform anyone’s life, but Zaria isn’t the first to find it. A gang of cutthroat thieves got there first, and their behavior makes Zaria question everything she sees. With an unknown enchantment at work, and forty criminals desperate to protect their hoard, she doesn’t want anything to do with the gold.
But when her royal friends reappear, Zaria discovers the cave is the key to defeating a threat to the entire kingdom. She can’t turn her back on her people, even if that means facing thieves and traitors with Crown Prince Tarek at her side. Zaria thought she’d found peace with her past, but now she isn’t sure if she’s more in danger of losing her life or her heart.

In this reimagining of the classic fairy tale, Ali Baba and the Forty Thieves, a servant girl must outwit a cunning adversary before she can claim the treasure her heart truly desires.
If you enjoy clean romance, adventure, and intrigue, then try the books in the Return to the Four Kingdoms series now! These interconnected fairy tale retellings each feature a different heroine who finds herself friendless in a strange land and who must fight to save her new home and win her happily ever after.