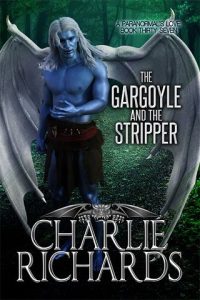 Into the Paranormal World: When a gargoyle sneaks into a strip club, he scents the other half of his soul in a distrustful stripper.

When Tasker overhears a few bonded gargoyles and their mates planning a night out at a strip club, he convinces them to sneak him in through the back. Once there, to Tasker’s shock, he scents his mate somewhere in the seedy joint. With a little help from friends, Tasker discovers that a sexy black stripper with the stage name Mongo is his mate. The human’s medium-brown skin and bleached-blond hair calls to him, but as much as Tasker would love to whisk the human from the place, he knows that wouldn’t be a good move…so he once again relies on friends.

Camry Palcha never thought he would end up a stripper, but after getting cut off when he came out, desperate times calls for desperate measures. The pay is good, even though he refuses the side offers of backroom hook-ups with clients. While he’ll never admit it to anyone at the seedy place, he’s a virgin. No way does he want his first time to be with someone paying him.

When a guy named Mitch approaches Camry about hiring him for a private gig, he nearly refuses. Except, the money will set him up for months, and that’s after covering his upcoming college tuition. When Camry arrives at the address, he’s shocked to find himself at a mansion. After girding up his courage and entering, Camry learns that paranormals are real. When one comes onto him, Camry has no experience to fall back on. Could Tasker’s interest truly be real? Or was the gargoyle’s desire simply a novelty, just like the rich jerks at the strip club who’ve been pestering Camry for weeks?