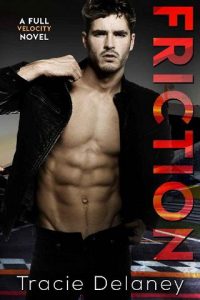 Get ready for the ride of your life!
Three full length novels, and three exclusive novellas only available in this special boxset.

Friction
Jared Kane… Our new racing driver.
God on the track.
And the man I didn’t know I wanted until I fell into his arms and kissed him before uttering a single word.
He’s resisting me at every turn.
But he’s wasting his time. I always get what I want. And I want Jared Kane.

Paisley Nash… The boss’s daughter.
Spoiled, entitled, tenacious, and spunky.
She’s completely off limits.
Until I’m warned not to touch her.
Then it’s game on.
Except taking her to my bed might cost me everything I’ve fought hard for.
No woman is worth that.
Not even Paisley Nash.

Gridlock
Tate Flynn… World Champion.
The poster boy of young drivers. And the man to blame for the death of my brother.
He glamorizes risk and danger, while I’m left to pick up the pieces.
I’m determined to expose the true colors of the sport he adores.
Sure, I have a fight on my hands, but I’ve got the teeth for it.
Bad luck, Tate. I’m coming for you.

Madison Brady
A woman with many faces.
Doctor, protestor, adversary.
She’s laid a family tragedy firmly at my door, except my conscience is clear.
She professes to despise me, but I’m not convinced.
They say there’s a thin line between hate and love.
And I have an urge to test that theory on my nemesis.
Heads up, Madison. I’m coming for you.
Inside Track

Devon Gray… An enigma. Intense, brooding, mysterious.
And the subject of my next biography.
There’s just one small problem—he’s refusing to participate.
I’ll wear him down eventually.
Everyone has secrets, and I’m going to expose his.
All I need is to find his achilles heel.
When I do, he’ll be in my book. And my bed.
Reilley Bennett… Writer. Force of nature. Pain in my ass.
Four years ago I made a terrible mistake, one I’ve paid for ever since.
My greatest fear? People finding out. Which is why I’ll never agree to her demands.
Or so I thought—until a turn of events makes it impossible to say no. I’ll need to be on my guard.
She’s used to being in control. So am I.
There will only be one winner in this battle of wills.
Me.

After The Checkered Flag
Three exclusive novels ONLY available in this special boxset. Find out what happened to our couples, Paisley & Jared, Madison & Tate, and Reilley & Devon after the race was over.