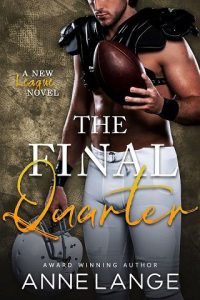 A quarterback facing the end of his career must come to peace with his past, and accept his present before he can move on with his future.

When his wife suggests they start a family, Mitch is thrown for a loop. When he’s taken out of the game, his failings from the past come back to haunt him, and Mitch blames his injury on his loss of focus. He’s unprepared for his career as a professional quarterback to be over. Nor is he ready to tell his wife about why football is so important to him, or why he doesn’t think fatherhood is in the cards. He’d rather put emotional and physical distance between them and focus on getting back in the game.

Serena Ryland always dreamed of becoming a mother. But when she mentions the idea to her husband, he freezes her out and she worries that if they don’t talk soon, she’ll lose him forever. When he refuses to come home to mend from an injury, she takes matters into her own hands, determined to spend more time with him, hoping to reignite the romance in their relationship. But she’s unprepared for the things she learns on this trip. Her husband has been carrying a few secrets that might change the outlook of their future.

Author’s Note: This book was first published under another cover and publisher in 2015. It has since been thoroughly re-edited, but there is no substantive changes to content or storyline. This book is written for a mature audience. It contains sexually explicit content and some profanity.