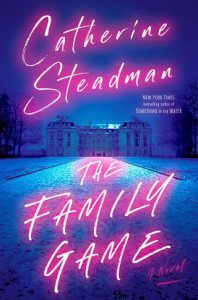 A rich, eccentric family. A time-honored tradition. Or a lethal game of survival? One woman finds out what it really takes to join the 1% in this riveting psychological thriller from the New York Times bestselling author of Something in the Water, Mr. Nobody, and The Disappearing Act.

Harry is a novelist on the brink of stardom; Edward, her husband-to-be, is seemingly perfect. In love and freshly engaged, their bliss is interrupted by the reemergence of the Holbecks, Edward’s eminent family and the embodiment of American old money. For years, they’ve dominated headlines and pulled society’s strings, and Edward left them all behind to forge his own path. But there are eyes and ears everywhere. It was only a matter of time before they were pulled back in . . .
After all, even though he’s long severed ties with his family, Edward is set to inherit it all. Harriet is drawn to the glamour and sophistication of the Holbecks, who seem to welcome her with open arms, but everything changes when she meets Robert, the inescapably magnetic head of the family. At their first meeting, Robert slips Harry a cassette tape, revealing a shocking confession which sets the inevitable game in motion.
What is it about Harry that made him give her that tape? A thing that has the power to destroy everything? As she ramps up her quest for the truth, she must endure the Holbecks’ savage Christmas traditions all the while knowing that losing this game could be deadly.