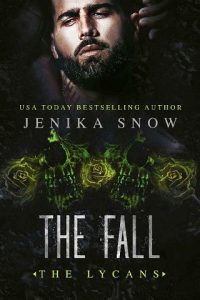 The Fall (The Lycans #7) by Jenika Snow – Free eBooks Download

Sebastian
I was a ruthless monster. A right-hand enforcer to the most powerful sociopathic vampire in the world.
The only thing that mattered was satiating my bloodthirst for killing.
When it came time to take out the Assembly, a group of demented humans who used creatures of the Otherworld for their own sick entertainment, I was ready to litter the ground with their corpses.
And I did my job well.
But when I woke up in the middle of nowhere and realized I’d been thrust into another dimension, the idea of death was a sweet relief.
But then I was found by an unlikely ally. She saved me.
This tiny Fae female with pointed ears, tiny fangs, deep red hair, and freckles that made me hungry and thirsty and dying to see every part of her.
Ada. My mate.
It was an enemies-to-lovers start, where it was her and me against everything else in this dangerous new world.
And for the first time in my life I actually… wanted something for myself. I wanted to protect instead of kill.
I wanted to love instead of hate.
I just didn’t know if I could ever be anything but the villain of my own story.