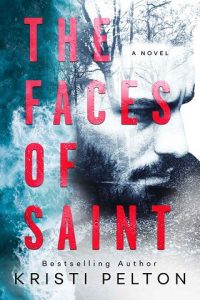 The Faces of Saint by Kristi Pelton – Free eBooks Download

She fought to save the world until someone wanted her dead.
A well-executed, deliberate escape.
Alone for forty days on the ocean.
Calling out over the radio night after night.
Until…an unfamiliar voice answers.
Her escape was planned. Everything about her life was planned…except for him.
Jenna, a young virologist with Asperger’s, discovers a deadly secret. On the run from the biotech lab where she has built her life’s work, Jenna is forced to leave behind everyone she loves and watch as they fall, one by one, to a nameless murderer. After seeking refuge on a sailboat and hiding deep offshore, she sends her brother a series of urgent messages. When finally a voice answers back, it’s not the one she’s been expecting. Will this man be her savior or her downfall?

She was not part of his plan.
Saint, an ex-Navy SEAL, has spent the last year recovering from a near-fatal injury during active duty. Unable to face a world he no longer feels part of, he has chosen a life of exile and loses himself in shame and disappointment, giving up on everything . . . until he hears an exquisite voice, crying out night after night on the radio. The longer Saint listens, the more convinced he becomes that he knows exactly who Jenna is and what he must do to help her. But once she has come back to shore, back to him, Saint’s agenda grows muddled, and his secrets begin to unravel.
Jenna must survive if there is any hope of protecting the world from the deadly secret locked within her mind. Her decision to trust a voice—to trust a Saint—will kill her or save everyone. But what she didn’t see coming, what may prove most deadly, is who stands behind it all.