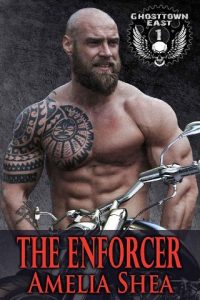 Single mom, Trini Hanson, is surviving. She works hard to pay her bills and raise her daughter, finding peace and a sense of family surrounded by the love and safekeeping of her brother’s motorcycle club, the Ghosttown Riders. But dealing with her deadbeat ex has left her exhausted, fed up, and in need of a vacation. Her daughter’s trip to summer camp is just the ticket. Trini sets her sights on rest, relaxation, and fun. Apparently, she’s set her aspirations too high.

When Trini’s path veers into Ghosttown East MC territory, she’s caught between ensuring her ex’s safety for the sake of her daughter and a dangerous liaison her heart won’t let her refuse. She is tied to club life as the little sister of an MC member, and she knows the rules and follows them. Her love and loyalty will always rest with her brother, who practically raised her, and his MC, who created a haven for her and her daughter. But Trini never imagined the overpowering strength, care, and wide-open potential she found in one kiss from Roan.

Ex-con and Enforcer, feared by all who cross his path, Roan Harris has earned his title and position in the Ghosttown Riders East. As a highly-respected member of the club since the age of eighteen, Roan is the epitome of loyalty and willingness, acting on his club’s behalf whenever he’s asked. The last thing he expected was to have a woman he’s been obsessing over fall into his arms.

But with Trini comes chaos, including butting heads with a brother in another charter, an ex indebted to his club, and a child. Handling Trini Hanson and her problems may be monumental tasks, but Roan is inclined to do whatever it takes as long as it doesn’t involve letting her go.

After months of sly, smoldering glances and midnight fantasies on both sides, it all comes to a head in the perfect storm. A battle of club against club, a threat against Trini and her daughter, and a showdown of enforcer against enforcer. But Roan understands gut-deep that this is the role he was born to play. He’s about to show everyone that whoever threatens him, his woman, or her child will see exactly why they call him The Enforcer.