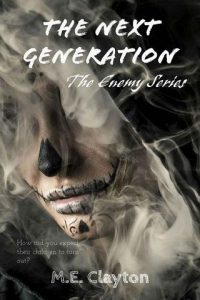 The Enemy Next Generation (1) Series
The Enemy series is a collective of books about what happens when you’ve been raised to never lose, no matter what the situation. When money, power, and status aren’t enough to pave the way, you simply turn your determination and ruthlessness up a notch. When the next generation of Reeds, McCellans, Marlows, and McIntires get a taste of blood, it only makes them crave more.

Resisting the Enemy
Dash Marlow wasn’t one to back down from anything. He hadn’t been raised to lose, no matter what the issue. So, losing the only girl that he’s ever loved is not an option, even if she does hate him.

Eden Rudolph wasn’t a weak wallflower. She hadn’t been raised to let the world beat down on her and not fight back. So, walking away from the only guy that’s ever broken her heart? Easy as pie.

Confronting the Enemy
Chance McCellan wasn’t one to apologize for himself. With the world at his feet, he’s never held back, and everyone knows it. However, he does have one regret, and he’ll stop at nothing to make it right.

Harper Crosby wasn’t a follower. With the next chapter of her life near, she just wants to graduate and move on with her life. However, she does have one minor issue at hand, and he just. Won’t. Go. Away.

Fighting the Enemy
Maddox Reed wasn’t one to bow to society’s rules. As one of the best hackers in the world, there wasn’t anything beyond his reach. So, when a certain brunette lands on his radar, it’s just the beginning.

Cassidy Spears wasn’t a gold-digger. As one of Windsor Academy’s charity cases, nothing mattered more than getting her diploma. So, when a certain lunatic approaches her, it’s definitely not a good thing.

Challenging the Enemy
Crew Marlow wasn’t one to care about consequences. However, when you weren’t able to control your emotions, every day was full of surprises. Still, none bigger than the past coming back to challenge him.

Athena Ashford wasn’t a fool. However, when you weren’t able to let go of the past, that opened up a huge debate on foolishness. Still, life has proven that there was no bigger fool than someone in love.

Daring the Enemy
Delaney McIntire Jr. wasn’t one to cower. Every bit as formidable as her family, she welcomes any and all challenges. So, when a quiet marauder sets his sights on her, she’s more than ready for him.

Kadon Sharpe wasn’t a quitter. Every bit as determined as his family, he refuses to allow failure into his life, no matter what. So, when a fiery predator allows him to get close to her, it’s game on.