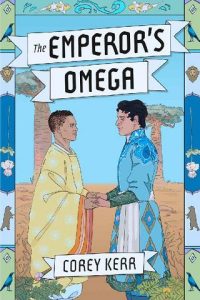 He married a man he had never met. The worst thing he could do was fall in love…

Prince Suriya never expected to marry. When his beloved sister dies shortly before her wedding, he agrees to take her place and marry a man he’s never met. As consort, he has one duty: to produce an heir for his husband and seal the alliance his people so desperately need.
But Suriya carries a secret that holds him back from bonding with his new alpha, even as Emperor Kenosi proves to be far more kind, patient, and handsome than Suriya dared to dream. Alone in a strange country, Suriya struggles with the demands of duty and the increasingly urgent needs of his heart as his secret threatens both his nation’s safety and his own future.
After all, what use is a consort who can’t bear a child?

This MM non-shifter omegaverse romance features an arranged marriage, a gentle alpha, an age gap, mpreg, and a happy ending.