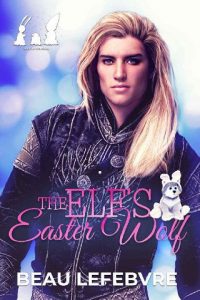 What’s a wolf to do when he’s the spare and not the heir to the Alpha of the pack?
Markos was looking forward to Easter, and now it’s been ruined by his father’s announcement that he is to be mated to an omega from another pack.
Not gonna happen.
Leaving his pack behind, Markos becomes lost and, guided only by his wolf’s instincts, finds himself in a valley filled with the colors of spring, the smells of chocolate, and a meadow full of numerous fluffy puffballs… Bunnies?
What was Fate thinking?
Estienne never expected his mate to show up out of nowhere, or to be a wolf, for that matter. And right before Easter of all times.
Maybe ignoring the big bad wolf would be the best idea for now…
But the Easter Bunny has other ideas, and Estienne’s own bunny isn’t so averse to the idea of Markos as a mate. Throw in the arrival of an entire wolf pack, and Easter preparations are tossed completely off the rails.
Just great.