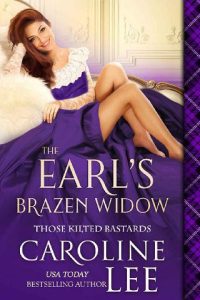 She might have been married to his father, but there was no way he was going to call Lady Violet Forbes “stepmother,” especially since he’d been the one to introduce her to pleasure all those years ago.

Ten years ago, Violet betrayed the man she loved…by marrying his father. It wasn’t her fault, not exactly (you know how these things go), but Malcolm was, quite frankly, more than a little put out by the news. Now, as the widowed Countess of Hatwaring, she wields power and wealth in her young son’s name, but nine-year-old Brom’s small empire is wobbling. Violet needs to start selling off some of his estates in order to maintain the rest…which means angering the man who already thinks her far too brazen.

His secret is the love which still shames him.
Malcolm Forbes, the illegitimate son of the Earl of Hatwaring, always thought of himself as academic and stoic. A decade of managing one of his father’s far-flung estates taught him to think before he acts, but when he receives a letter from his father’s widow—and the only woman he’s ever loved—stating her intentions to sell his home, he reacts most rashly.

Now they’ve made a brazen bargain.
A deal is made, and after a mere month as the young earl’s tutor, Malcolm will secure the deed to his home. Unfortunately, this means a month with the one woman who can enrage his anger—and his passions—unlike anyone else.
Violet, meanwhile, is determined to earn his forgiveness, even if it means risking everything she’s hoped for, and revealing her secrets.
This likely won’t end well.