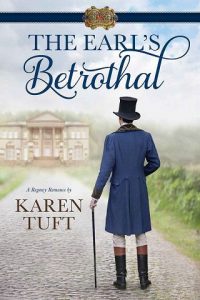 Out of the war and into another, Captain Lord Anthony Hargreaves finds the politics of romance to be as uninviting a battle as the one that nearly cost him his life in Badajoz, Spain.

Wounded both mentally and physically from the Peninsular War in 1812, Anthony returns home to find that his older brother has died, placing Anthony next in line to inherit the estate. But he’s not ready for such responsibilities. And when Anthony’s dying father pleads with him to marry and produce an heir to preserve the family title, it nearly sends Anthony over the edge; nevertheless he dutifully faces a long line of hopeful young ladies who await him. No one grabs his attention, though, like Amelia Clarke, his mother’s stunning companion, who is off-limits for the earl. But when Anthony unwittingly puts Amelia in a compromising situation, he dedicates himself to protecting her reputation.

But the horrors Anthony faced while away from home have left him feeling broken and tormented. And Anthony finds himself drawn to Miss Clarke, the only one who can chase away his demons, but he must overcome the hostility of a society driven by class, a jealous duke bent on revenge, and himself—for could Amelia ever really love a haunted man?