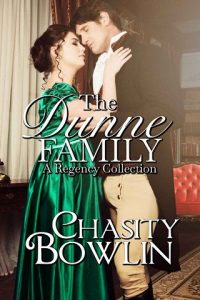 The Dunne Family Series is the complete collection is available for a limited time.

THE LAST OFFER
Miss Olivia Dunne was the darling of society until an abduction and elopement scheme by an unscrupulous man left her reputation in tatters. Having moved from paragon to pariah, Olivia realizes that there is no reason for her to continue abiding by society’s mandates. She embraces her scandalous nature by doing what she’s been accused of—take a lover. The man she’s chosen is one she’s secretly loved for years, but she’ll need to employ the aid of an unlikely ally to carry it off.

Lord Burke, Viscount Holland, has loved Olivia for years. He even offered for her once, only to be dismissed by her brother, his oldest friend. With his pride still stinging, Burke is confronted with the horrible truth that Olivia had never rejected him at all. Her brother never told her of Burke’s interest in her. But if he tells her now, she’ll take it for pity and reject him out of hand. The only way to make her his wife is to first accept her offer to be his mistress.

THE FIRST PROPOSAL
It was a blow to Persephone “Percy” Blake’s vanity to discover that she’d somehow become a spinster aunt. It’s certainly not what she set out to be. Now, with the recent passing of her father, the country estate and the library that were her life are long gone. She’s living as a poor relation on the less than freely given charity of her sister and acting as a de facto governess for her nieces and nephews. A more ungrateful, spoiled and thoroughly rotten bunch has never existed!
And then it happens. Her nephew’s kite, which she told him not to fly, becomes tangled in the limbs of a tree next door. It’s either retrieve it at the cost of her own dignity or face her sister’s wrath for not properly supervising her charges as, after all, it’s the least she can do in exchange for room and board. Percy climbs the fence and finds herself in a wonderland of lush booms.
Algernon Dunne is bored. So bored that he’s taken up gardening in order to pass his time. After all, there’s only so much brandy a man can consume in a given day without feeling wretched for it. And he’s found that despite the tame nature of his new hobby, there’s something satisfying in cultivating the perfect bloom. It’s teaching him patience and also the one thing he’s always been missing in his life… humility. Gardening has given him peace of a sort.
That is until a ranting, cursing, fireball of a woman comes over his garden wall in a cascade of pink skirts and sends them both tumbling to the ground. One look at her lovely brown eyes and her kissable lips, and Algernon is well and truly sunk. Now he just has to convince her that love at first sight can apply to much more than just his garden.

THE OTHER WIFE
Aurora Sefton, Lady Sheffield, has been a widow for almost as long as she was a wife. Of the two states, widowhood has always been much preferred. She lives independently, enjoying her freedom, wealth, and occasional lovers. Then she’s asked for a favor from an old friend… to take the unexpected heir to a dukedom that had very nearly gone extinct and turn him into a gentleman. But Gavin Barreton, The Duke of Westerhaven, is much more than she ever bargained for. As their relationship takes a decidedly intimate turn, she vows not to be led by her heart. But there are things in life that are beyond anyone’s ability to predict or control… and love is certainly one of them.

Gavin never intended to fall in love with the woman who was attempting to transform him into the proverbial silk purse. He certainly never thought she’d fall in love with him, a rough and tumble brawler from the streets suddenly burdened with a title. He wants nothing more than to marry her. In truth, he has every intention of asking her… until another woman enters the picture claiming to be his wife.