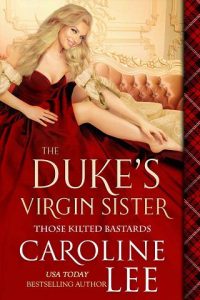 They haven’t quite managed to tame her wild streak.

It is to be The Match of the Season. At least, that’s what Lady Carlotta Merritt, sister to the cool and aloof Duke of Cashingham, has been told repeatedly by her mother. The Dowager is beyond thrilled about her daughter’s engagement to Society’s most eligible bachelor, Lord What’s-His-Face. Carlotta, on the other hand, would much rather be gallivanting around her brother’s Yorkshire estate, falling out of trees or fishing in the streams or reading one of her naughty books in the shade on a summer day.

But her mother has made it very clear that she’s to behave herself, as befitting the sister of a duke, and Carlotta has been trying, honest. But when Mother is called up to Scotland, she invites Carlotta and her fiancé to follow…sans chaperone. That’s when her brother volunteers his own brother-in-law—the illegitimate Scotsman with a charming grin, a wicked reputation, and battered hands which make Carlotta think all sorts of wicked thoughts—to tag along.

And he knows all the best ways to be wild.
Keith Oliphant knows exactly who he is; the natural-born son of an earl, a close friend to the laird of his clan, and the best damned bare-knuckled boxer in all of England and Scotland combined. These hands of his have done things most men can only imagine, and now they face their biggest challenge yet; holding the safety of a duke’s sister, one whose smile and love of adventure make him yearn for things he can’t have. Especially since she’s engaged to the complete clot-heid who is sitting between them in the coach.

Aye, this journey to Scotland will be a difficult one, despite the opulence of traveling with a duke’s sister. Between his impossible desires, Lord What’s-His-Face the fiancé, and Carlotta’s own wild streak, Keith suspects he’s facing his biggest challenge yet: when he delivers Carlotta to the duke, will she still be a virgin?