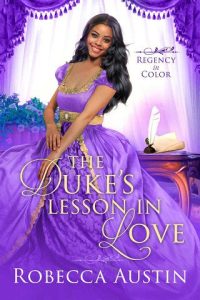 After a disastrous love affair, Lord Gilleasbuig was content living a life outside of London’s spotlight until a series of accidents threatened to leave his estate without an heir. Lucky for him, he had a son he could claim and protect.
After all, how difficult could it be to fetch his estranged son from an orphanage with too many children to care for?
Except, the breathtaking Miss Sadie Fields, who had cared for the child since birth, was a force to be reckoned with. She was furious at Gill for shirking his duties but he was irresistibly drawn to her fire.
Determined to prove himself a good father and win Sadie’s trust, Gill offered her a chance to continue watching over her charge. When she agreed, Gill was eager to return to his boring secluded life, but danger continued to shadow him.

While dodging danger in an unconventional arrangement, a more permanent union risked disappointing his son and losing his last chance at love.