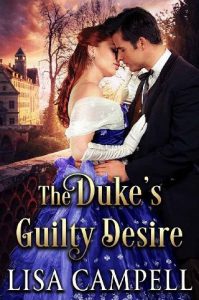 Only he can save her from the hell he created…

Lord Aaron Fitzwilliam suffers the consequences of the war even after its end. Even though he is a Duke now, the cruel crimes he was forced to do still haunt his mind.
To save his duchy’s future, he needs to do again something against his will; marry a wealthy Earl’s spoiled daughter.
A year ago Catherine could not believe her luck. She had met the man of her dreams who was about to marry her and save her from her vile uncle’s guardianship.
But everything changed the moment her betrothed died in the war. Now, sworn to never love again, she has to endure her family’s mistreatment for life.
Until the day her cousin’s future husband arrives and can’t take his eyes from her.
Aaron never expected to face the betrothed of the man he killed in the war. But his guilt is not the only thing that rises when looking at Catherine. A forbidden desire won’t let him rest.
Their attraction is mutual but he has so many reasons to stay away from her. For what will happen when she discovers his darkest secret?
She has the face of the nightmare he never wants to wake up from…