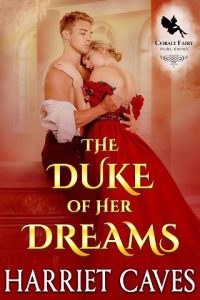 The Duke of her Dreams by Harriet Caves – Free eBooks Download

“Only a rake can give me what I want…”
Helen is a most inquisitive Lady. Her latest fixation? Romance novels, mostly inappropriate ones. Which ignite in her a most scandalous question: would gaining some experience with a rake before marriage be so bad?
Theodore Simmons, Duke of Wallington, longs to feel something again after his sister’s tragic death. The only thing that satisfies him is spending his nights with one-time affairs. Except that his grandmother will do anything to see him marry.
Never had Helen expected that throwing herself in the arms of a rake would end up in her being ruined. Or worse, in her being sent off to the country to suffer at her religious aunt’s hands. Until her salvation comes in the form of the very same rake and a fake engagement. Only…his kisses do not feel so fake after all…

*If you like a realistic yet steamy depiction of the Regency and Victorian era, then The Duke of her Dreams is the novel for you.
An enchanting regency romance of 60,000 words (around 300 pages), written by Harriet Caves and published by Cobalt Fairy.
No cheating, no cliffhangers, and a strong happily ever after.