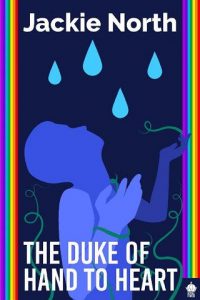 Duke of Camprodon, Rainmaker, Merrick Blackburn’s life is coming apart. His groom left him at the altar days before the wedding and he’s been accused of causing a drought by Tarik, the Duke of Arles.
Merrick’s winery, Hand to Heart, one of the oldest in the land, is in jeopardy, due to neglect and that dang drought. Most of his staff has left, and he’s on the verge of going broke.
Desperate, Merrick hires handsome Ryan McGrail as steward to bring the vineyard back to life. But Ryan distracts Merrick from the job at hand and Merrick isn’t sure, but Ryan might be flirting with him.
Ryan lost his last job protecting his cousin from abuse. Ryan hates being in the spotlight shining on the Duke, but he needs a job and needs it quick. He’s not sure, but is Merrick flirting with him?
Will the growing feelings between them save the winery? Will it ever rain? Will Merrick ever make it to the altar?