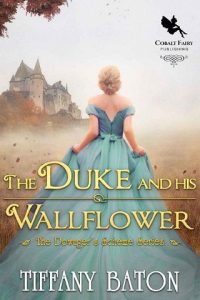 “I have spent every day regretting the answer that I gave you.”

The Follet family has never abided by societal rules. Which might explain why Lady Emma is still unmarried, and with no prospects whatsoever. Until her bossy aunt decides to intervene, and promises she will see her married by the end of the season, even if she has to make the match herself.
Following a scandal involving his unwed sister, a man not worthy of being called a gentleman, and a broken nose, Duke Jasper owes a lot to his mother for using her connections to keep it quiet. To return the favor, he has agreed that he will attend any social event she asks of him for a whole year. On one condition: marriage is off the table.
Both pressured to behave by two equally formidable Dowagers, Emma and Jasper quickly find solace in each other’s company. Feelings start to bloom between them, but their newfound happiness doesn’t last for long. New and old enemies alike wage war on the unlikely couple. And everything will end just as it began: with a scandal…