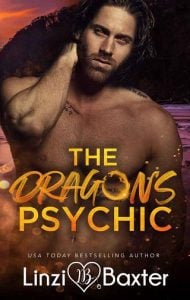 She was supposed to be just a job. A paycheck. Now she’s his destiny.

Talia hadn’t planned on dying today. But accidentally defying the Supernatural Council isn’t exactly a wise life plan. When she did her duty and touched a bloody knife to determine guilt or innocence, her vision seemed…off. So was Councilman Gideon’s rush to declare a shivering child guilty of murder.
Now Talia’s trying to lose herself in the West Virginia mountains with the child in tow. And the mercenary on their tail has an uncanny ability to find them, no matter how far they run.

Kirin’s dragon-shifter senses make him the most sought-after bounty hunter in these parts. But something about this job smells…wrong. And when he finally gets his hands on the fugitive, he gets the surprise of his nearly three-hundred-year life. The fragile, determined woman in his arms is the mate he’d given up all hope of finding.
Now instead of breathing down her neck, he’s bound to protect her at all costs. But if they can’t figure out who wants this child dead—and why—they could all wind up sharing the same grave.

Note: The Dragon’s Psychic is the first of a three-book series. Each book will have a complete HEA romance, connected with a continuing plot that will conclude with book 3.