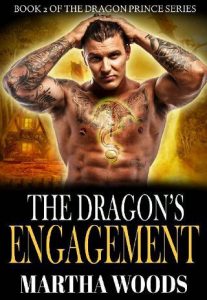 There’s something missing in Endia’s life.
Princess of the Earth Dragons, and due to inherit her aging father’s throne when the time eventually comes, she finds herself in one of the highest and most enviable positions throughout the entire kingdom. Her people, however, are struggling. Just barely hanging on into the modern age, thanks to numerous intrusions on the part of the surrounding human population, driving them into a life of complete secrecy.
She doesn’t know what kind of future she can possibly hope to guarantee for them– or, for that matter, what kind of a future she can possibly hope for herself.
For Endia is engaged to be married, to one of the most powerful warriors among the kingdom of Earth Dragons– a fierce dragon shifter by the name of Baill, the son of one of her father’s oldest friends. Their union, she knows, is designed to reinforce the unity of the Earth Dragons, ensuring the steady continuation of strong leadership well into the future. Baill, however, is about as opposite from Endia as night from day.
Short-tempered and violent, with a passionate hatred toward the human race, Baill has long viewed Endia’s father as a stumbling block to their people. A weak and ineffective leader, whose mysticism and ideology of peaceful coexistence are sure to be buried with the King, forgotten to history the moment Baill eventually takes over.
Endia harbors no love whatsoever to Baill in her heart, but is resigned to going through with the marriage anyway, as per her father’s wishes.
Things get especially heated between the two of them one night, when she and Baill are out walking, and find themselves held at gunpoint, by a common human thief. Endia, with the best interests of her people in mind, peaceably surrenders to the thief, giving him what he wants, in the hope of avoiding a violent scene. Baill, however, quickly flies off of the handle, transforming into his dragon form, and setting their attacker on fire, leaving Endia to save him and clean up Baill’s mess.
Furious, and feeling absolutely hopeless about her future, Endia later storms off, unable to stand being in Baill’s presence, and desperately in need of a drink.
Meanwhile, not at all far from the incident in question, a dragon shifter from another tribe sits watching his infant nephew, clumsily stretching his wings and learning how to fly.
Fri hails from a nearly extinct race known as the Protectors. He, his brother, and his human sister-in-law recently moved out west to escape persecution, from a merciless tribe of dragon shifters known as the Dark Ones.
Though glad for his younger brother’s newfound happiness, Fri finds himself missing the company of his own kind, and mourns the possibility of ever being able to have a proper family.
Depressed, and needing to get his mind off of things, Fri decides to head out for a drink– and by sheer coincidence, happens to wind up at the exact same bar as Endia.
The two dragon shifters, despite being from very different backgrounds, instantly recognize one another for what they are– and just as instant is their mutual attraction to one another, as deep and as all-consuming as anything they’ve ever felt.
But with Endia engaged to be married to a fierce warrior, and the fate of their kind hanging in the balance, can either of them possibly even think to act on their desires? Or will the dangers of doing so prove far too great for them to overcome?