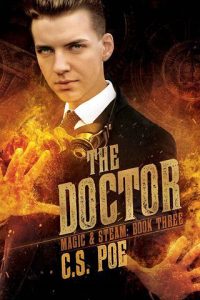 1882—Gillian Hamilton, magic caster and Special Agent with the Federal Bureau of Magic and Steam, has been stripped of his title, badge, and freedom. Gillian’s true name and powers have been exposed, so now he’s kept under lock and key. To make a tragedy worse, Gunner the Deadly has returned to his life out in the Wild West and has not been heard from since.
Rumors of a doctor, known only as Sawbones, with access to illegal magic have persisted into the new year. Gillian believes that violence, chaos, and certain death will befall New York City if this criminal isn’t apprehended. And despite having lost his sense of purpose, Gillian knows he’s the only one capable of confronting this new madman—with or without the backing of the FBMS.
But such dangers should never be undertaken alone. Gillian will need both Gunner’s deadeye marksmanship, as well as his love, if he’s to detain Sawbones before irreparable damage is done to the magic of his world.