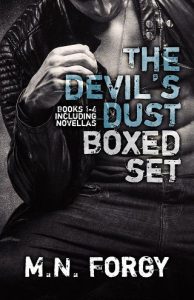 #1 – What Doesn’t Destroy Us
Shadow has grown up among drug addicts, whores and murderers. The only family he’s ever trusted has been the Devil’s Dust motorcycle club. He will do anything for a brother; even kill. In fact, killing is so easy, he’s made a career of it. His one regret is not being able to kill his own worthless mother. When Dani shows up with her provocative temper and innocent charm, Shadow begins to question his violent lifestyle. But can he trust her with his demons?

#2 – The Scars That Define Us
After a breathtaking turn of events, Shadow is looking at life in a different perspective. Not knowing who he can trust or who he can forgive has left him feeling desolate and alone. As Shadow is laying behind his rifle, he wonders if he can pull the trigger to eliminate the threat. He takes a deep breath and squeezes the trigger, the rifles recoil ignites the fuel that drives him.

#2.1 – The Broken Pieces Of Us
The president of the Devil’s Dust MC, Bull, is good at running women off and is even better at pissing off his brothers. When he sees the way his vice-president is treating his ol’ lady, he tries to keep his thoughts to himself. The one thing Bull insists on in his club is respect and loyalty: respect for the patch, respect for your brother, and loyalty to the club. However, after finding Babs in a harsh predicament after a run in with Locks, he can’t help but step in.

#2.2 – Love That Defies Us
With violent murders unfolding around the club, it has thrown town locals into a panic. What they didn’t expect was for them to get caught up in the carnage.

#3 – The Fear That Divides Us
Road Captain of the Devil’s Dust Motorcycle Club, Bobby has the scars to prove just how dangerous his life is. He gives the world he knows hell and loves every moment of it. Wearing a panty-dropping grin along the way, his fierce life has never been a problem for him, until her. Jessica is the only female who has him distracted in his game. After taking him to bed, she’s the only woman to tell him to take a hike. Waking with her gone, he can’t resist her pull. He’s seen the marks on her body, ones which tell the horrors she’s lived through. He’s also seen the fear in her eyes when she lets herself become weak to his advances. Bobby has a decision to make. Can he help Jessica, or will it mean giving up his carefree life?

#4- The Lies Between Us
Lip is no stranger to the criminal life. Growing up among convicts, he wanted nothing more than to show his worth. He’ll do anything for the club without question, including serving six years in prison. But nobody could have predicted life’s plan. Rugged, tattooed, and wanting nothing more than to have Cherry, Lip is no longer the man whom Cherry remembers. After his release, he came out a beast with more secrets and lies than his cage could hold.