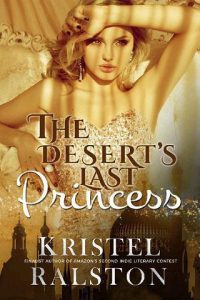 Princess Aisha Al-Sabagh was thought to be dead after a rebellion in her country, Bhareib. Her whole family was murdered but she managed to survive the bloody uprising. When she was about to faint among the dunes, a nomad tribe rescued her and healed her wounds. She is a survivor, and now that years have passed, Aisha wants to get back what was cruelly taken from her. She does not care if that means she will have to face the current Bhareib’s King who by the way she considered a complete jerk and a dirty womanizer. How could he be any different considering his background? She is willing to compromise everything she has, even her own heart, to avenge her loved ones.

Used to fighting in the world’s most complex business tables, Bhareib’s King Sayed Al-Kahalel feels overwhelmed by the lack of foreign investment in his country; not even the smallest effort in his ruling can be wasted, every minute counts. The day his future is about to be sealed, a storm blows all his plans under the shape of a beautiful warrior with captivating eyes. Sayed never contemplated the idea of seeing Aisha again, even less that she was able to make his strong self-control shake and make him realize that maybe his emotions were not completely forgotten.

Dunes will witness a story that will not only define the fate of Bhareib’s Kingdom but also the destiny of two strong tempered lovers whose passion will fight to bring back glory to their land.