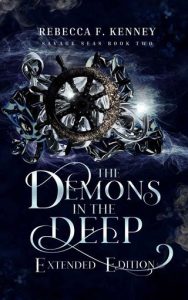 (This is the Extended Edition, with full intimate scenes between the characters. For the fade-to-black, closed-door version, try the regular edition of “The Demons in the Deep.”)

Mai sets sail with her cousin Kestra and Captain Flay on the Wind’s Favor, but her excitement about seeing new lands is tinged with sadness. When the Wind’s Favor makes port at the town governed by Flay’s cruel father, Flay is forced to enter a competition against the other captains in his father’s fleet. If Flay does not score a top place in the contest, he will lose his ship and be forced to crew aboard one of his father’s slaving vessels.
When an old friend returns, Mai realizes her joy at his reappearance is tied to other emotions–things she has never felt for anyone before. But the ongoing competition puts Rake in danger, and risks Mai’s goal of learning more about the mermaids’ transformative technology.