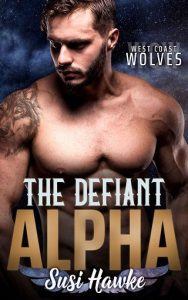 “Between the thick fur and my own nerves, it took longer than it should’ve to find the fluttering proof of his heartbeat. I’d known he was alive since he didn’t smell like death. No… he smelled like… home. Like my home. The one place where I would always belong. ”

Lucian Smith, unwanted at birth, is a defiant alpha who’d not only dare anyone to call him unclaimed, he’d proudly display the proof. He doesn’t want or need a pack other than the family he’s built with his crew—The West Coast Wolves. For so long, it was just them… an unlikely pack of alphas who took to the open road and helped where they could, doing random acts of kindness and expecting nothing in return.

Until the first of one of them stepped up when duty called and took his own pack to rule. This ended the brothers-in-arms’ days of riding wherever the road took them when fate conspired to give each of the brothers a pack to rule. Even Lucian… the unlikely defiant Alpha who would not only dare anyone to call him unclaimed, he’d proudly display the proof.

While out on a night’s ride, Lucian comes across a half-dead dog on the side of the road. After stopping to help, he discovers it’s no dog, it’s a shifter—an omega wolf. The true mate Lucian never dared hoped for is now in his arms, if he can just rescue him first. Little does he know there are a dozen more omegas who need saving, his mate is just the start.

With a secret over twenty years old and millions of dollars at stake, the people who stole innocent babies with plans for the ultimate payday won’t let go of them easily. Except… even omegas have hidden strength and their own ways to fight back. With the help of his crew, Lucian is in a unique position to help these lost young men and set right to old wrongs.