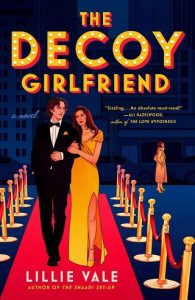 A laugh-out-loud funny and whip-smart romantic comedy from the author of The Shaadi Set-Up, about a young woman who takes the place of her celebrity doppelgänger, and must fake-date the actress’s sexy costar boyfriend.

Writer Freya Lal has a huge secret: she’s a dead ringer for It-girl actress Mandi Roy. Her second novel is due in a month, but inspiration is nowhere to be found. Desperate to shake off her writer’s block, Freya leans into her look-alike abilities and indulges in some mistaken identity for simple perks, like scoring a free mimosa or getting into a trendy nightclub.
Actor Taft Bamber appears to have it all: gorgeous, talented, and Mandi’s love interest both on- and off-screen. But what nobody knows is that their relationship is a PR stunt, and after years of playing make-believe, he’s yearning for something real.
When Freya’s latest impersonation of Mandi goes viral thanks to Taft’s accidental interference, rumors of a breakup threaten Hollywood’s golden couple. To make amends, Freya is forced to give Mandi a little time off: she’ll pretend to be the actress for a month, move in with Taft, and squash the rumors by acting completely in love. But as Freya and Taft play house, it becomes impossible to ignore that their instant chemistry isn’t just for the cameras. While faking it, they might have just found the real thing.