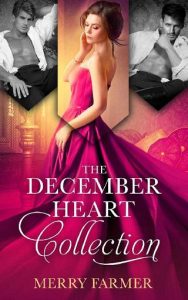 Three sizzling, romantic stories together in one collection for the first time!

DECEMBER HEART
What if the older man your father arranged for you to marry turned out to be a sizzling silver fox with a broken heart?
After a failed engagement ruins Mariah Travers’s reputation, her father surprises her with the announcement that he’s giving her away to widower Lord Peter deVere, the Earl of Dunsford, a prominent member of the House of Lords, and a man nearly twice her age. If it’s a choice between eternal spinsterhood at home or being whisked off to Starcross Castle in Cornwall to be a countess, Mariah is willing to go along with it.

It’s a good decision, as Peter turns out to be a hunky silver fox with the skill to unravel all the mysteries of the marriage bed to Mariah in the best possible way. And when Mariah discovers the truth about Peter’s tragic, twenty-year marriage, his failed dream of being a father, and his tender, broken heart, she knows she is the right woman to fulfill his fantasies. But to do so, she must expose and defeat the wicked plans of Peter’s nephew and heir-for-the-moment, Lord William.
Lord William’s efforts to drive a wedge between Peter and Mariah cause havoc and heartbreak at Starcross Castle, which will take an act of heroic devotion to overcome as Peter sets out to prove that true love is ageless.

STARCROSS LOVERS
Ginny Davis has risen through the ranks downstairs at Starcross Castle, from maid to lady’s maid for Lady Mariah deVere. But as grand as her new position is, the one thing she wants the most feels out of her grasp. Her heart belongs to head stableman Harry Pond, but she’s convinced that she’s already ruined her chances with Harry by being too bold too soon. So when mine surveyor Stephen Adler takes a shine to her and offers her the adventure of a lifetime, her heart is torn.

Harry has loved Ginny from the moment he met her, but he believes that her ambition and hunger for adventure mean she will never look on him as more than a bit of fun. He’d do anything to convince her to marry him…and when Adler swoops in, anything is what he just might have to do.

STARCROSS DREAMS
In spite of the prestigious position she has earned as a member of the staff of Starcross Castle, maid Poppy Miller knows that service is not her destiny. She was born to be a wife and mother, and when she looks at Starcross’s head gardener, Nick Parsons, she knows exactly whose wife she wants to be.

Nick is charmed and delighted by Poppy. Her sweetness, coupled with her clumsy ways and flightiness, warm his heart, and every time he holds her in his arms as he picks her up from yet another spill, he wants to keep her there forever. All he dreams about at night is her kiss.
But the course of true love never runs smoothly. When a promise Nick made before he met Poppy comes back to haunt him, not even true love can overcome the hurdles in Nick and Poppy’s way. Poppy must stand up for herself and take risks she would never have dreamed of to save the man she loves from the grip of his past.