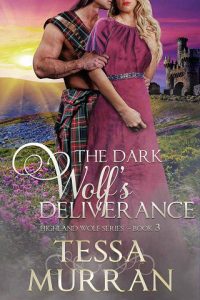 He must gain her trust. His life depends on it.

Kenna Moncur longs to escape life at remote Sgathach Dun Castle where few folk venture close, wary of rumours that an evil spirit lurks within its walls and fearful of her father’s reputation as a cruel and villainous laird. When darkly handsome Conall Campbell ends up a prisoner in Sgathach Dun’s grim dungeon, a whole new world beckons for he is unlike any man Kenna has ever met. She takes pity on him, risking all the keep him alive, while dark forces move against his clan.
But does Conall return the feelings she starts to have about him or is he just using her to escape Sgathach Dun’s horrors? If Kenna frees him, will it be the beginning of a new life or will an old curse stalking the Moncur family bring her new world, and her new love, crashing down?
Conall Campbell has been sent to live at Dunslair Castle with his father’s best friend, Rory Mor Campbell, to curb his wild ways. He is expected to relinquish his dissolute lifestyle and become a man of stature like his father, Laird Duncan Campbell. But there is a darkness within Conall, and he is at war with himself and the future laid out before him. When he is taken prisoner by the Moncur clan, Conall must surrender his pride in favour of mere survival, and his captor’s daughter, pretty, trusting Kenna Moncur might just be his means of escape. Will her budding love for him break against the darkness within him, or can she lead him to the light? And in tying Kenna’s fate to his, Conall could be leading her into danger because someone, somewhere, is out to destroy him.

The Dark Wolf’s Deliverance takes the reader on a desperate flight across the Highlands and into a deadly rivalry over the love of a beautiful and vulnerable young woman, all set against the backdrop of a murderous witch hunt engulfing Scotland.
The Dark Wolf’s Deliverance can be enjoyed as part of the Highland Wolf Trilogy or as a stand-alone novel.