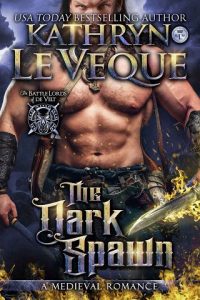 The son of The Dark Lord joins forces with the Executioner Knights to bring you the Medieval Romance you’ve been waiting for. It’s a no-holds barred, dark and passionate romance where the rules don’t apply.

Prepare to enter the Darkness…

Coleby de Velt is the firstborn son of the notorious Dark Lord, Ajax de Velt. He grew up idolizing his father—and knowing all about his history—and he has his father’s dark streak. That makes him a perfect agent for William Marshal and the Executioner Knights. As William Marshal himself says—’Tis better to be at the Devil’s right hand than in his path…’ And Coleby is definitely the Devil.

He’s the spawn of The Dark Lord and everything that goes with it.

When Coleby falls for an unusual woman, it’s with his whole heart. He doesn’t know how to do anything half-measure—and he doesn’t know how to protect himself. Lady Corisande “Cori” de Bourges, an accomplished woman of considerable talent, has bewitched him and for a sweet moment in time, Coleby experiences something he’s never known before—a blooming love and a calm to his restless soul he can’t begin to describe. He believes he has finally found happiness. Perhaps the darkness has finally met with the light.

Until the Scots attack and Cori is captured.

Unfortunately for the Scots, The Dark Spawn is unleashed. Coleby will stop at nothing to rescue his beloved Cori, but when he finally regains her with surprising ease, a horrible truth is revealed.

All is not as it seems.

Can Coleby forgive the unforgivable? Or will The Dark Spawn’s heart turn cold?

(Note: This is a dark romance with elements of Medieval brutality, as is expected in the Battle Lords of de Velt series. There is an unconventional love story with unconventional elements, but as always, a satisfying HEA.)