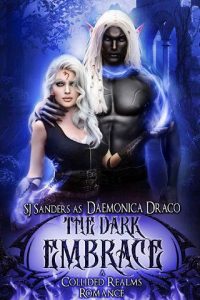 In a world generations after the collision between the human and otherworldly realms, Robyn was born with powers she never asked for, powers of necromancy that demanded training by the joint law of the western kingdoms and changed the course of her life forever. In a world where necromancers were viewed with distrust, she was getting by living on the fringe, doing whatever she could to help people when a soul demanded her assistance, the first to call upon her for resurrection. Though uncommonly loud, nothing in her training prepared her to be tied by power to a monster—a drow elf, Ashul, who resented being leashed to her.
It was something that shouldn’t have been possible. Humans didn’t resurrect elves but now Robyn was attached to a surly, dangerous elf that she didn’t want and would soon enough be rid of. She just had to get him to the monastery before he got her killed so that the grandmaster could transfer his bindings to something more appropriate for the drow to pass the rest of his life. Yet, the more time she spent with him, the more she began to feel things—things forbidden between a necromancer and the resurrected.
Ashul was from a different world, a society in which he resented the complete rule of the females over him. He became a warrior and monster among his own kind to escape his bonds and yet the betrayal that led to his own death imbittered him further. Resurrection should have been an opportunity to claim his vengeance, not being under the control of another female—and this time a human. As much as he hated it, he couldn’t ignore his growing admiration for the one he was leashed to. There was no escape for either of them. Worse, the more time that passed, the less he wanted to be parted from her.

They broke every rule for their love. Can they find peace together when a magical compulsion imbedded in the resurrection spell forces them to return to the necromantic monastery? Or will they have to face the final consequences for a forbidden love?