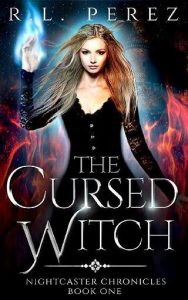 She’s a witch with no powers. He’s a shape-shifting vampire. Trusting him could save her . . . or cost her everything.

Brielle Gerrick can’t access her magic. In an effort to awaken her powers, she gets sucked into a time portal—to a castle in Spain in the year 1735.
The castle is attacked by demons. Their leader is a shape-shifting vampire named Leo Serrano, an arrogant creep who enjoys taunting Brielle.
When Brielle’s dark powers awaken, the others in the castle turn on her. They try to capture her and uncover the source of her magic before it unleashes itself.
Desperate to escape, Brielle must put her trust in Leo and his coven of vampires. She’ll do anything to master her powers and get back home.
Even if it means surrendering herself to her enemy.