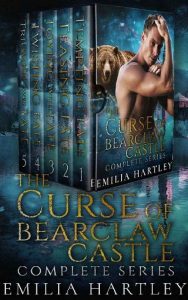 Reading wasn’t always Emilia’s passion, but over the years she developed an irreplaceable love for books. She writes about large, protective alpha males and their strong, sexy female mates.

Book 1 – Tempting Fate
Fixing up Bearclaw Castle is probably a mistake, but Roderick Carson intends to do it anyway.
It’s the only thing he can think of that’s sure to bring his long-absent brother back to his life. Roderick knows he’s losing himself to his bear, and he wants to see his brother one last time and say goodbye before that happens.

What he’s not prepared for is an engrossing blonde who won’t stay out of his business—or his heart.
When Morgan D’Marco sees trouble coming for the abandoned castle on the edge of town, she thinks her gift might be wrong for once. Nobody has lived in that place for years. Some say it’s haunted. Cursed might be more accurate. Either way, no one lives there.

Book 2 – Teasing Fate
Wade Santana’s idiot bear thinks it’s found their fated mate—but Carolina’s into women.
Dumb beast. It’s been nothing but trouble since Wade woke up with the thing inside him after a feral bear attack. The only upside is the chance of finding forever love, but it doesn’t look like that’s in the cards for him, either. His bear might be excited about chasing down and taking Carolina, but Wade’s mother taught him to be a gentleman, and he’s certainly not going to force himself on a woman who doesn’t want him.

Carolina Short is used to depending on herself. Her dad abandoned her early, and her mom’s a bit of a flake, but she’s proud of the life she’s made for herself. The only bright spot in her life at the moment is a handsome stranger who restores antiques for the new owners up at Bearclaw Castle.
But rebound relationships never last. It’s too bad because being around Wade feels like coming home.

Book 3 – Toying with Fate
All Ana wants is an explanation.
She thought Brandon was her forever love right up until he didn’t show up for their wedding. He left without a word. No justification. The year since has been grueling, and Ana wants to move on. But she can’t do that while she’s holding onto Brandon’s engagement ring—and his memory.

Brandon hasn’t been fit for human society since a bear attacked him at his bachelor party and left him with his own internal beast. He’s certainly not fit to be around Ana. Seeing her makes him realize how much he has missed her, though.
Maybe he can control himself and his beast around her, but she’ll never forgive him for leaving her at the altar.
Will she?

Book 4 – Twisting Fate
Vaughn Carson vowed never to step foot in Bearclaw Castle again.
The cursed place has brought his family nothing but pain for generations, so he doesn’t understand why his brother would want to restore it.

Mimi Fisher knows better than anyone what’s wrong with Bearclaw Castle. After all, it was her ancestor who cursed the Carsons, bringing misery on both their families. Mimi is determined to find the remaining two stones whose destruction will break the curse, setting both the Carsons and her own family free.

When she meets Vaughn, his gentle attention only increases her resolve. If anyone deserves the freedom to love and prosper, it’s Vaughn Carson. She’ll liberate him from the curse, even if it means she’s paving the way for someone else to love him.

Book 5 – Triumph Over Fate
Kai wants to see Bearclaw Castle razed, but he can’t destroy the place with his sister inside.
Not that Kai is ready to forgive Mimi for leaving him alone to deal with their father, but he does still love her. He figures he should at least tell her the old man has died. While he’s still off balance from his sister’s betrayal, she comes in.

Since her husband left her, Stormi Blackford has sworn off men, but Kai Fisher is tempting. She can’t remember the last time anyone looked at her with that kind of desire. Kai is just the right mix of protective and supportive. She’s beginning to wonder why Mimi thinks her brother is such a beast. Maybe it’s the influence of the ghost up at the castle?